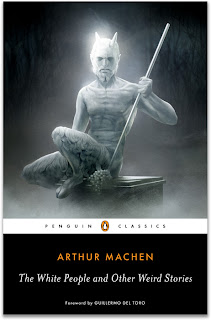 The news revealed at The Friends of Arthur Machen Abergavenny AGM in March 2010 that a volume of Machen would be published in Penguin Classics was greeted with delight by Machen admirers. We already discussed this earlier this year in this post. This volume certainly fulfils those expectations - it is a wonderful acknowledgement of Machen’s importance that he appears in one of the world’s most famous paperback series of classic literature. The last of Machen’s book to appear in his life time was his 1946 Penguin paperback edition Holy Terrors. Like that book we can hope this book will bring Machen’s stories into more bookshops and libraries worldwide and hopefully will create a whole new readership. S. T. Joshi has done some excellent work promoting Machen over the years, as he has done for many other authors of weird tales, and this is a major step.

The book contains a good selection of Machen’s stories a number of which are not easily available in paperback. One difficulty might be however is that someone looking at the striking cover might think Machen’s The Great God Pan was included in the volume. Given this story is very easily available elsewhere this is not much of problem however.

The inclusion of a three page Guillermo de Toro, foreword “The Ecstasy of St Arthur” is fascinating. The columns of Machenalia have mentioned his admiration for Machen on numerous occasions. He clearly is greatly impressed with Machen’s work opening by saying: “It is a rare breed of fabulist who transcribes and records — rather than invents — a reality invisible to us... Arthur Machen was one of these.” Del Toro’s vision of Machen is a very personal one and he contrasts him with writers like Lovecraft, MR James and Borges believing Machen shows us “Evil is never dormant – it gestates.”

The famous weird tales scholar S.T. Joshi's well written introduction is based on his previous introductions to Machen collections and on his critical work on Machen. It is an insightful look over Machen’s work as whole, with some very good commentary on The Three Impostors for example. It will certainly prompt any new reader of Machen to seek out his other work and encourage debate amongst more long standing Machen enthusiasts. The annotations are an excellent addition to the text identifying a great number of obscure references and giving some useful background. There are some factual errors here and there, but this does not really detract from usefulness of a good introduction and supplementary material for the general reader.

“In a career that spanned more than six decades, he produced some of the most evocative weird fiction in all literary history. Written with impeccably mellifluous prose, infused with a powerful mystical vision, and imbued with a wonder and terror that their author felt with every fibre of his being, his novels and tales will survive when works of far greater technical accomplishments fall by the wayside.”

There are already reviews of this new volume on the internet from the Los Angeles Review of Books as you can see here. Also a very interesting review essay by Michael Dirda Review Article on Machen. The identical British edition will be launched in December [now January apparently]. This book is a great development along with the Library of Wales paperbacks last year it shows Machen is becoming more widely available again. See Machen published in The Library of Wales.

[See also Machenalia Spring 2010 (p. 30-1). This is a much abridged version of a review that will later appear in Machenalia.]

I can’t believe this collection doesn’t include the Great God Pan. That seems to me to be an utterly perverse omission although I can guess why it isn’t there. Joshi didn’t care much for this story, considering its effect to be based entirely on an obvious plot twist. Now this is clearly wrong since the first time I read the story I was already familiar with the plot through Lovecraft’s essay “Supernatural Horror in Literature”. The story still impressed me enormously. I was even more impressed when I reread it later when I, of course, knew the plot twice over. Indeed – I am not sure what Joshi means by a twist – unless it is the revelation that all the appearances of a strange woman turn out to be of the same strange woman.

For me, the true genius of the story lies in what I would call Machen’s “stepping stone” effect. He creates a hierarchy of horror. On the lowest rung is the strange woman who is half human and half monstrous. Behind her, and more horrifying, is her father Pan who is wholly monstrous. But it seems to me that even Pan isn’t the centre of the story. Machen suggests that behind Pan is the most hideous thing of all – the natural world conceived as something completely alien to humanity. And Machen’s trump card is that he keeps even the lowest rung of the hierarchy i.e. the strange woman out of sight – only suggesting her indirectly. It is a truly awesome effect. No wonder Lovecraft admired the story so much.