Arthur Machen, The Bowmen and The Angels of Mons - The basics 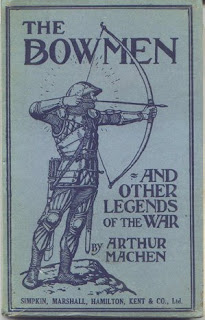 "In the popular view shining and benevolent supernatural beings are angels. . . I believe, the Bowmen of my story have become 'the Angels of Mons'." Arthur Machen

The Angels of Mons controversy is the the event which brought Machen his greatest fame in his lifetime and has been attached to him ever since. The questions surrounding the existence of the Angels of Mons caused massive debate at the time and continues to do so. Although the strength of the debate has subsided since its heyday New Age books which claim angels literally appeared at Mons are still being published today.

The Bowmen was first published in on 28th September 1914 following the Battle of Mons in late August 1914 near the start of World War One. Mons was the first major engagement between the British and German armies of the war. Heavily outnumbered the British were forced back into the famous Retreat from Mons, but inflicted heavy casualties on the Germans. A month after the battle Machen wrote a piece which was published in the London newspaper Evening News for which he was a journalist. The Evening News was London's most popular paper with a wartime circulation of up to one million readers at the time. The story described ghostly archers from the days of Agincourt, supported by St George, appearing to a surrounded group of British troops. The bowmen fired their arrows upon the Germans and averted defeat.

Machen soon found out in the days and months after the story was published that a number of people believed his story was true - that something supernatural like the story he had told had really happened and he had to correct a number of the people on the facts. However these enquiries were on a small scale - it was only in late April and May 1915 that rumours seem to have erupted on a mass scale in Britain that Bowmen, Angels or St George had been at Mons fighting for the British. Over the summer and autumn stories of Angels soon began to be reported in newspapers across the world, many sermons were preached, a film, posters, postcards and songs were all made in honour of the Angels of Mons.

When Machen claimed his story inspired these tales others attacked Machen for being unpatriotic and not believing in the Angels. It is clear as Machen pointed out at the time the majority of reports of Angels spreading in Summer 1915 were second hand, unreliable and some were deliberately faked by men who had not been at Mons. Such hoaxes have been an important part of how the Angels stories spread.

Read Machen's story and his introduction which gives his careful summary of the full background here.

Dr David Clarke, a expert in folklore and modern myths, argues in his book The Angel of Mons (2004), the most detailed examination of all the evidence on the case ever to appear, that Machen's view was essentially correct - that his story played a vital role in disseminating the idea that something supernatural intervened at Mons. Clarke showed in his book that all the evidence indicates that the first mass rumours concerning supernatural warriors at Mons seem to have erupted in Britain in April 1915, six months after the battle, when Machen's story had been in circulation for a long time. This means that suggesting that The Bowmen had no effect on the stories is very difficult especially as the earliest reports which mentioned Angels often referenced Machen's story as well. This is clearly shown by the fact many of the tales also contained elements from The Bowmen.

Crucially Clarke points out the stories published around April and May 1915 often attribute their sources to mysterious anonymous British officers. He suggests these men may have been part of a covert attempt by military intelligence to spread morale-boosting propaganda. They may have been led in this by Brigadier-General John Charteris.

His memoirs At G.H.Q., published in 1931, Charteris claimed the story of the Angels of Mons was a popular rumour amongst the troops in September 1914, this was the earliest any extant account has said the rumour was in circulation in France. However it appears from Clarke's examination of Charteris' original notes and letters that he wrote those entries after the war and amended the dates. Indeed Charteris himself says in the foreword of At G.H.Q he has added to the material in the book. Given Charteris' association with pieces of allied propaganda like the story of the German corpse factory the Kadaververwertungsanstalt this might indicate Charteris had been behind an attempt to use the Angels for propaganda purposes.

The only reliable first hand evidence relating to incidents at Mons and its aftermath comes from two or three accounts from named soldiers who said they saw phantom horsemen and other strange sights during the Retreat. These reports were made in the autumn of 1915 as the controversy mounted. However this does not support the Angel stories. Most of the popular angel stories claim, just like in Machen's story that supernatural beings intervened directly to deter the enemy in battle, not on the march. Furthermore the hallucinations of seeing mounted soldiers are very different to the descriptions of the Angels spreading at home. While it seems certain that soldiers in the retreat, without sleep for days and exhausted from marching, did suffer what they thought of even at the time as hallucinations they do not account for the form of the popular version of the story.

A more mysterious element is talk of shining clouds which also surfaced in mid 1915 which could refer to unusual weather conditions at the time of Mons. However these reports are more uncertain and are anonymous. They were also made in response to newspaper appeals for information and after rumours of the Angels were already rampant on the home front. We cannot be sure that memorirs of seeing strange clouds were not made into stories about angels by witnesses in retrospect in response to hearing about rumours started by Machen's story.

Even today people still wish to disassociate Machen from the story of the Angels. To date however no-one has succeeded in doing so as the evidence simply does not allow it. The importance of Machen's role is supported by the following facts :

A - No Early Witnesses

No-one has yet found any evidence of firsthand stories of supernatural intervention at Mons or afterwards pre-dating April 1915. No story of the supernatural which is not directly connected to "The Bowmen" has been found written down or discussed before that date despite the fact soldiers and support personnel like nurses regularly wrote home. In August 1914 a number of reporters had evaded the ban on front line reporting and were in France near the front line at the time of Mons none of them mention rumours of Angels. The way British newspapers printed the story avidly in mid to late 1915 shows they would have leapt on the story if available. The Battle and retreat from Mons generated a vast number of memoirs and reports, but none printed before late 1915 ever mentioned the Angels or anything similar. This six month gap is a crucial problem. Six months provides plenty of time for Machen's story to spread and mutate.

B - The Society for Psychical Research report

A careful investigation in 1915 of the Angels rumours by the Society for Psychical Research, who had longstanding expertise in such matters stated of for firsthand testimony, "we have received none at all, and of testimony at second-hand we have none that would justify us in assuming the occurrence of any supernormal phenomenon." The SPR went on to say the stories relating to battlefield "visions" which circulated during the spring and summer of 1915, "prove on investigation to be founded on mere rumour, and cannot be traced to any authoritative source."

Given that the majority of the members of the Society for Psychical Research believed in the existence of supernatural forces, but wanted to find reliable evidence for them the conclusions of this report are highly significant. If the SPR could find no evidence at the time it seems highly likely none existed.

C - The Rumours started on the Home Front

The furious pamphlet war and press controversy which erupted in 1915 was due to Machen's claims in a mass circulation newspaper that the Angels were inspired by his story. It was Machen's Evening News which was the first Fleet Street paper to circulate accounts of Angels. All the books on the Angels were written only after Machen published The Bowmen in book form in August 1915. It should be remembered that regular mail from home was one of the most important things for men in France. Newspapers and books were mailed out and passed out and shared and read and re-read. So it was very easy for the controversy to spread to the Front.

Even if the stories were spread in April 1915 by officers for propaganda purposes then it was clearly the existence of Machen's fiction which prompted military men to choose that rumour to support.

So even if an unnamed soldier did actually think he saw Angels at Mons, a fact which has never been proved, and his tales somehow reached Blighty, and then somehow spread the only reason the story was listened to was because Machen's story had prepared the ground.

One of Machen's main opponents who claimed the Angels were real was a nurse who claimed there was a cover-up and the army had forbidden witnesses to talk. Phyllis Campbell promised that “the evidence exists... and when the war is over and the embargo of silence is removed, Mr Machen will be overwhelmed with corroborative evidence.” That evidence never came - we are still waiting for it over 90 years later.

The Angels of Mons saga is a strange example of wartime mythmaking but also bizarrely reflected Machen's own curious life and works. His stories like The Three Impostors and The Hill of Dreams had blurred the difference between fiction and reality now The Angels reflected something similar. Machen never liked the story much and was soon sick of the affair but the story of the angels followed him to his death. Every issue of Machenalia reveals a new aspect of the Angels saga.

The case of the Elusive Angels of Mons by Alan S. Coulson, MD, PhD. and Michael E. Hanlon,

Argues Machen was right as seen in the conclusion:

But if, as the only evidence seems to indicate, the legend's source is Mr. Machen's story... Machen's rescuing bowmen, converted to Angels then reduced to the simple, singular Angel of Mons, thus, moved from the homefront to the trenches and was sustained by both the public in Britain and the frontline Tommies.

Argues Machen's story created some of the tales, but suggests others had independent origin. Dr David Clark's work however has undermined Maclure's conclusions.

David Clarke, Rumours of angels: a legend of the First World War – detailed study in Folklore

This article forms the basis for his later book the definitive study which backs Machen's claims.

Thanks for this overview of the controversy surrounding the Angels of Mons. Since I've discovered Arthur Machen that this story gas fascinated me.

Glad you find it useful. There is a lot of interesting stuff about the controversy about.