The Dream of Olwen Phillips of Croeswen by Arthur Machen 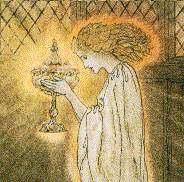 [This extract from Machen’s graal romance The Great Return was published in 1915, the year before Janet was born.]


It was on that Sunday night that Olwen Phillips of Croeswen dreamed her wonderful dream. She was a girl of sixteen, the daughter of small farming people, and for many months she had been doomed to certain death. Consumption, which flourishes in that damp, warm climate, had laid hold of her; not only her lungs but her whole system was a mass of tuberculosis. As is common enough, she had enjoyed many fallacious brief recoveries in the early stages of the disease, but all hope had long been over, and now for the last few weeks she had seemed to rush vehemently to death. The doctor had come on the Saturday morning, bringing with him a colleague. They had both agreed that the girl's case was in its last stages. "She cannot possibly last more than a day or two," said the local doctor to her mother. He came again on the Sunday morning and found his patient perceptibly worse, and soon afterwards she sank into a heavy sleep, and her mother thought that she would never wake from it.
The girl slept in an inner room communicating with the room occupied by her father and mother. The door between was kept open, so that Mrs. Phillips could hear her daughter if she called to her in the night. And Olwen called to her mother that night, just as the dawn was breaking. It was no faint summons from a dying bed that came to the mother's ears, but a loud cry that rang through the house, a cry of great gladness. Mrs. Phillips started up from sleep in wild amazement, wondering what could have happened. And then she saw Olwen, who had not been able to rise from her bed for many weeks past, standing in the doorway in the faint light of the growing day. The girl called to her mother: "Mam! mam! It is all over. I am quite well again."
Mrs. Phillips roused her husband, and they sat up in bed staring, not knowing on earth, as they said afterwards, what had been done with the world. Here was their poor girl wasted to a shadow, lying on her death-bed, and the life sighing from her with every breath, and her voice, when she last uttered it, so weak that one had to put one's ear to her mouth. And here in a few hours she stood up before them; and even in that faint light they could see that she was changed almost beyond knowing. And, indeed, Mrs. Phillips said that for a moment or two she fancied that the Germans must have come and killed them in their sleep, and so they were all dead together. But Olwen called out again, so the mother lit a candle and got up and went tottering across the room, and there was Olwen all gay and plump again, smiling with shining eyes. Her mother led her into her own room, and set down the candle there, and felt her daughter's flesh, and burst into prayers and tears of wonder and delight, and thanksgivings, and held the girl again to be sure that she was not deceived. And then Olwen told her dream, though she thought it was not a dream.

She said she woke up in the deep darkness, and she knew the life was fast going from her. She could not move so much as a finger, she tried to cry out, but no sound came from her lips. She felt that in another instant the whole world would fall from her--her heart was full of agony. And as the last breath was passing her lips, she heard a very faint, sweet sound, like the tinkling of a silver bell. It came from far away, from over by Ty-newydd. She forgot her agony and listened, and even then, she says, she felt the swirl of the world as it came back to her. And the sound of the bell swelled and grew louder, and it thrilled all through her body, and the life was in it. And as the bell rang and trembled in her ears, a faint light touched the wall of her room and reddened, till the whole room was full of rosy fire. And then she saw standing before her bed three men in blood-coloured robes with shining faces. And one man held a golden bell in his hand. And the second man held up something shaped like the top of a table. It was like a great jewel, and it was of a blue colour, and there were rivers of silver and of gold running through it and flowing as quick streams flow, and there were pools in it as if violets had been poured out into water, and then it was green as the sea near the shore, and then it was the sky at night with all the stars shining, and then the sun and the moon came down and washed in it. And the third man held up high above this a cup that was like a rose on fire; "there was a great burning in it, and a dropping of blood in it, and a red cloud above it, and I saw a great secret. And I heard a voice that sang nine times, `Glory and praise to the Conqueror of Death, to the Fountain of Life immortal.' Then the red light went from the wall, and it was all darkness, and the bell rang faint again by Capel Teilo, and then I got up and called to you."

The doctor came on the Monday morning with the death certificate in his pocket-book, and Olwen ran out to meet him. I have quoted his phrase in the first chapter of this record: "A kind of resurrection of the body." He made a most careful examination of the girl; he has stated that he found that every trace of disease had disappeared. He left on the Sunday morning a patient entering into the coma that precedes death, a body condemned utterly and ready for the grave. He met at the garden gate on the Monday morning a young woman in whom life sprang up like a fountain, in whose body life laughed and rejoiced as if it had been a river flowing from an unending well.
Posted by Your Friend, G at 17:40