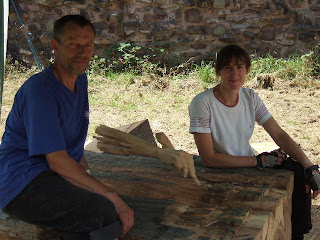 The Sculptor Jiri Netik and his wife siting on the Machen sculpture.

After a long agonising process including much debate over what sculptor to be selected Machen has another memorial in Caerleon besides the plaque on his house. 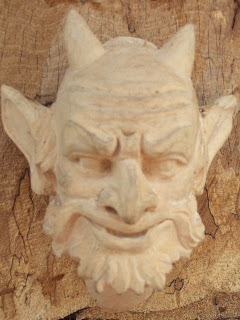 It seems the owner of the house had recently made alterations in his premises, and on digging the foundations for some offices, the men had found a curious head, evidently of the Roman period, which had been placed in the manner described. The head is pronounced by the most experienced archaeologists of the district to be that of a faun or satyr. [Dr. Phillips tells me that he has seen the head in question, and assures me that he has never received such a vivid presentment of intense evil.] 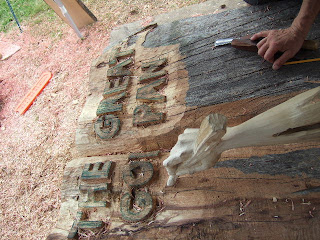 First he set himself to the severe practice of the text; he spent many hours and days of toil in struggling to fashion the serried columns of black letter, writing and rewriting till he could shape the massive character with firm true hand. He cut his quills with the patience of a monk in the scriptorium, shaving and altering the nib, lightening and increasing the pressure and flexibility of the points, till the pen satisfied him, and gave a stroke both broad and even. Then he made experiments in inks, searching for some medium that would rival the glossy black letter of the old manuscripts; and not till he could produce a fair page of text did he turn to the more entrancing labour of the capitals and borders and ornaments. He mused long over the Lombardic letters, as glorious in their way as a cathedral, and trained his hand to execute the bold and flowing lines; and then there was the art of the border, blossoming in fretted splendour all about the page.

The Hill of Dreams

All this despite the best efforts of wind, rain and storm to attack it. It was completed before the rain got really bad. Where it will be placed is currently under discussion it is safe in storage. Let me know if you have any ideas on location but it is quite delicate so it will probabally go indoors.

We still need money to pay for it though so please buy a copy of the booklet! If you have ever enjoyed Machen's work buy a copy the booklet has been widely admired by such luminaries as Mark Samuels said "Lots of brilliant stuff in there; you did an excellent job on it!", Ray Russell and Mark Valentine.

So he pottered on; reading everything, imitating what struck his fancy, attempting the effect of the classic metres in English verse, trying his hand at a masque, a Restoration comedy, forming impossible plans for books which rarely got beyond half a dozen lines on a sheet of paper; beset with splendid fancies which refused to abide before the pen. The Hill of Dreams 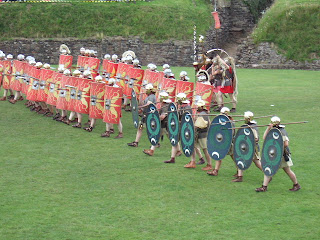 The Legio Secunda Augusta march to celebrate rites to Faunus at the new Machen sculpture.
Posted by Your Friend, G at 11:41