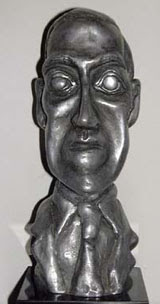 In 2006 the Friends of Arthur Machen were on a select short list nominated for a prestigious World Fantasy Award. The Friends were nominated for the excellence of their publications Faunus, Machenalia, and the critical acclaimed John Gawsworth, The Life of Arthur Machen in the category of a SPECIAL AWARD: NON-PROFESSIONAL. A glance at a list of previous winners of the award reveals that former winners of World Fantasy Awards include the greatest names in fantasy literature over the last twenty years. The award is a bust in the form of none other than H. P. Lovecraft, that ardent lover of Machen's work.

In stiff competition at the award ceremony in November in Texas The Friends of Arthur Machen were beaten by Telos Books, who write a variety of good books on screen SF and fantasy. The full results are on the Award website.

That Doctor Who revival emanating from Machen's own home ground of South Wales is clearly difficult to beat. Despite their disappointment the Friends were still thrilled by even getting to the nominee stage for such an important award with all the recognition from the World Fantasy community it implies for the quality of the society, its publications and of course for Machen's importance to fantasy literature. Other nominees for that particular award included the journal dedicated to another master of fantasy, and a great admirer of Machen, The Cimmerian which focuses on Robert E. Howard, creator of Conan, and Jess Nevin's excellent The Encyclopedia of Fantastic Victoriana which inevitably featured Machen.

This category is usually won by a semi-professional small press rather than a society. Indeed The Friends are the only society ever to be nominated for the award besides the far larger British Fantasy Society which won in 2000 - and they reflect British Fantasy in general rather than the writings of one Welsh author.

Winner of best Anthology was :The Fair Folk ed. Marvin Kaye (Science Fiction Book Club) with many tales of sinister fairy beings a theme which Machen used well. Other notable nominees for Awards who are known Machen admirers were Graham Joyce for his The Limits of Enchantment which was up for best novel and Tanith Lee was up for her story in the best short story category with her tale from The Fair Folk. Caitlín R. Kiernan was up for several awards too and she too has mentioned Machen positively before I believe.
Posted by Your Friend, G at 10:58